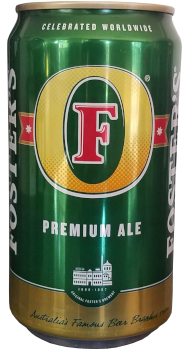 I could have trusted my gut instinct the first time, and thereby save additional damage to my literal gut. But Foster's Premium Ale (FPA) tasted so foul upon initial examination that I felt the need to confirm. This was mistake No. 2. Mistake No. 1 was trying this green-canned monstrosity in the first place.

Foster's Lager is bad, but it's bad in the same lazy, inoffensive way as other bad beers. It can be choked down. I did not find the same to be true of the ale version, even amidst advantageous conditions for swill consumption.

I saved one of my worst ideas of 2018 for last when I decided to give Foster's Premium Ale a second chance on New Year's Eve — my wife's birthday and a night when the kid was staying with grandparents. I decided to add FPA to one of the extra beers I would drink that evening. Why? Because I am not a smart man.

It my unhappy duty to report that FPA lived down to its initial impression, even following the dulling of the senses by other, better drinks. It was so bad that I had to tap out before it was all gone. The beer-like substance had become too warm for me to finish. And if you know me well, this is as damning an indictment of a beer as I can make.

In many ways, Foster's Premium Ale is one of the worst beers I've ever had. Is it objectively as bad as something like Natty Daddy? Probably not, but it's close. And given the price and status it (I guess) enjoys as part of "Australia's Famous Beer Brand", one would expect something at least Passable. FPA tastes somewhere in the range of Milwaukee's Best Ice without the corresponding low expectations.

This is normally the part of the review where I'd wonder what sort of awful, health-harming ingredients the fine people at MillerCoors shovel into this "Australian" brew. In the case of their Premium Ale one doesn't have to wonder, it is proudly included in subheadings on the site — twice. Caramel.

What ingredient give Foster's Premium Ale its "brilliant copper color", "caramel notes" and "smooth caramel finish"? It's not, as one would assume, the barley malt used. No, it's our good friend Caramel Color, a suspected carcinogen.

I'm not sure what else to say about Foster's Premium Ale after "it tastes too bad to finish and maybe causes cancer." Don't drink this beer yourself, and for darn sure keep it away from any laboratory mice.