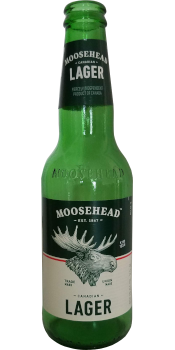 This is a story about how a sweatshirt, long ago discarded, led to a beer review. I don’t know why dad’s old Moosehead Lager sweatshirt still sticks out in my mind after all these years. I cannot remember my father’s wardrobe in great detail, but I remember that old Moosehead beer logo sweatshirt he had. Maybe it’s because that sweatshirt hung around f o r e v e r, slowly morphing from everyday wear, to work shirt, to cleaning rag.

The shirt dates back to the first house I remember living in, making Moosehead the first beer I can remember. For the longest time, I didn’t even know it was an actual beer. Given the logo and its relative absence from store shelves, I half-assumed it was a novelty — another fine fake product from Spencer’s Gifts or some such.

Moosehead exited my life for the next few *ahem* decades, until I saw it in my local grocery store a few weeks ago. I started laughing when I saw it, told my wife the sweatshirt story, and made an addition to the future review list.

Until a few weeks ago I had assumed that Moosehead Lager was either A) not a real beer or B) yet another regional brand bought out long ago. It's also packaged in the always suspect green bottle, so I took my first sip with a “brewed with an actual Moose’s head” joke already in mind.

Happily, Moosehead doesn’t have as much of the light-induced flaw as its green-bottled brethren. It has just enough funk to be interesting, but not enough to overpower everything else. Although the usual Passable Beer caveats — it isn’t that good, the aftertaste is a little sweet, and it should be consumed ice cold — apply, I quite enjoyed my Moosehead six-pack. I’m also pleased to report that it pairs well with tacos.

Speaking of food and beverage from Mexico, Moosehead reminds me a little of Dos Equis lager. The Canadian brew is probably the better of the two because I didn’t feel the need to chuck a lime in the bottle.

Moosehead, located in one of Canada’s smallest provinces (New Brunswick), claims to be the last major Canadian brewery owned by Canadians. Given its status as a pale lager outside the AB InBev/MillerCoors machine you may have a hard time finding Moosehead, but if you happen across it and are looking for a half-decent Yard Beer you should give it a try. At the very least, it’s a pleasantly Passable beer from someone other than the aforementioned Big Beer hydra.

Now, if you’ll excuse me, I have an overpriced sweatshirt to find and purchase.