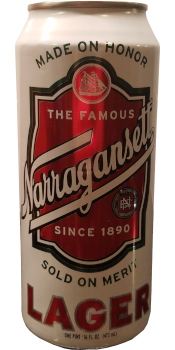 Given the right context and setting, most beers—even ones that aren't good—can be enjoyable. Narragansett Brewing's flagship lager is no exception. This American-style lager is a fine complement to a summer day spent eating seafood in a New England coastal town.

I love how these brewing companies try to dress up the description of an otherwise bland product, which, spoiler alert, ‘Gansett most definitely is. Narragansett's "secret blend of Pacific Northwest hops" imparts an IBU of 12 (for comparison, most hoppy IPAs clock in north of 50 IBUs). An IBU of 12 means that they aren't using many hops at all.

Beyond that, nearly all the hops grown in America come from the Pacific Northwest, and there aren't all that many different varieties — especially ones you'd use in an American-style lager. I'd guess that "secret blend" amounts to a handful of two different hops.

Oh, and the corn from Iowa. Someone who doesn't know how beer is brewed might read that and think, "Oooohh, Iowa corn. Good stuff, that." No one would notice if tomorrow Narragansett started using corn from Nebraska. The truth is that they use corn instead of malt because corn is a cheaper source of sugar. In theory, a brewery would want to hide any ingredient other than barley, water, hops, or yeast. Marketing copywriters are evil like that.

The beer's current tagline, "Made on Honor, Sold on Merit", dates back to around 1910, though. And like all good taglines it only makes sense if you don't think about it too hard. Narragansett lager, like most of its American lager kin, is likewise best enjoyed when you don't think too hard about it. I wouldn't say it's interesting enough to make any extra effort to track down, but it's definitely worth seeking out the next time you're on the New England coast.