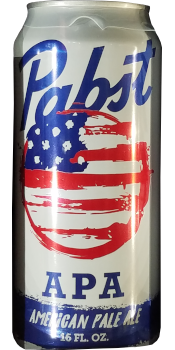 My in-laws tell a story about an acquaintance who, upon taking his first sip of wine, complimented it by saying, "I've had better, but none cheaper." I initially felt the same way about my most recent discovery, Pabst American Pale Ale. Until I did some math.

It does, however, accomplish what it sets out to do. Pabst APA is as unpretentious and straightforward as it claims to be. But it only hints at flavors other beers in its price-range fully explore. The taste is exactly what you'd expect a PBR brewed with just enough Chinook, Liberty, and Cascade hops to taste like. I'll have to take Pabst at their word and concede those three hops are in there, I just couldn't tell you where.

I guess the result tastes like a beer for the "rest of us." But if you subtract out the beer drinkers who have stuck with the same brand exclusively for 30 years and the craft beer snobs, I'm not sure that "the rest of us" that are left constitutes enough of a market to justify this beer's existence. It's almost like Pabst made a decent-enough American Pale Ale but left it entirely without a home of its own.