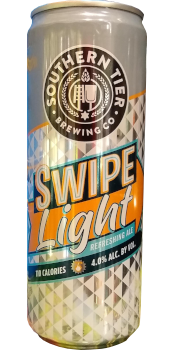 As I find myself entering an age at which one might begin yelling at clouds, I try my best to avoid being an old man yelling at clouds. But some days I can't fight the compulsion to tell the kids to get the hell off my lawn. Sadly, this will be one of those days. I understand why a brewery would name a beer after a meme based on a dating app, but that doesn't mean I have to like it.

I get the sense that a growing number of adults enjoying some their first few legal beers have no use for Grandpa's light beers. And with good reason. Millennial disdain for Bud/Miller/Coors is a point in the generation's favor. And if you want to catch the eye of this market segment, I guess you could do worse than asking them to "Swipe Right" on something.

Not everything new needs to be meme-related, though. Despite my love for the Spider-Men pointing at each other meme, I would be fine if internet culture in general just went away. The internet runs the good memes (even Spider-Men) into the ground after about five seconds. For every good meme, there are roughly 100,000 bad ones currently being shared by people you thought you loved.

Sure, one could make a killing by slapping Fortnite on a can and calling it a "Performance Ale" or "Gamer Fuel" — actually, Mountain Dew already did it — but that doesn't mean it should be done. I enjoyed Southern Tier's version of a Passable Beer — a lot, actually — I'm just not sure I'm ready to give it "Would Date" status on Tinder. I am currently in a long-term relationship with Sierra Nevada, and one of our relationship rules is no dating apps.

For some reason, I had always assumed Southern Tier was located somewhere in the Southern United States. The brewery is actually in Western New York and is a lot closer to Toronto than Atlanta. Southern Tier's market reach is well earned; it brews good beer. With such a good reputation, it should be able to name a Passable Beer just about anything they want and we, the Passable Beer Lovers of American (PBLA), should feel inclined to try it.

That a brewery like Southern Tier felt the inclination to name a damn fine beer "Swipe Light" to grab attention is an indictment of both the need to capture eyeballs in an oversaturated beer market and our own technology-obsessed culture. Every generation worries about the next one — and it has always been for naught, generally — but dammit, kids, you don't need Instagram Influencers telling you what beers to drink. You have passablebeers.com for that.

Now, with my daily cloud-yelling exercises out of the way, I need to go eat a high-fiber breakfast and rub some ointment on my sore shoulder before telling the kids next door that I'm keeping their soccer ball the next time it lands in my yard.